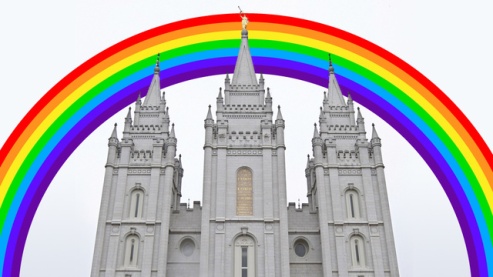 Well, it is the month of rainbows, banana hammocks, and PRIDE parades, a month where anything can happen: where straight-living gay men come out of the closet and where Mormons group together to march for acceptance. If you like to dabble around in the blogosphere surrounding mormonism you’ve probably come across these two sources of discussion, and as the son of a gay man I thought I’d weigh in on what these things mean to me. No, you didn’t ask for them, but here they are anyways. My thoughts may be unexpected to people on both sides of this issue.

First of all – Josh Weed’s “coming out” article. This thing has spread across Mormon social media like wildfire; but if you’re still in the dark, here’s a brief background. Josh has been married for 10 years, has three children, is an active member of the LDS church . . . and he is gay. Well, he was born gay and is gay in his sexual orientation but he lives happily in a straight relationship and doesn’t act on his homosexuality at all. His article is extremely well thought out, sincere, and meaningful, and the response he’s received has been wholly unexpected and mostly positive. If you haven’t read it, take a moment and do so by clicking here. Yes, it is quite long, but worth the time and something I hope many more people will read.

The reason it has spread so quickly, however, is something that troubles me quite a bit. I sincerely hope I’m wrong. I think most people are missing out on the power and significance of what Josh is saying. Here are the things I hope everyone will take away from what he wrote:

I am sexually attracted to men. I am not sexually attracted to women. It is very simple. I have many, many years of experience which confirm this to be true, but it’s really as simple as what a girl asked me in junior high—and I’m sorry if this is a little blunt, but I’ve never found a question that cuts to the heart of the matter more effectively— “so, if everyone in this room took off their clothes, would you be turned on by the girls or the guys?” My answer, which I didn’t say out loud, was unquestionably the guys. And it was unquestionably not the girls. And that still is my answer. It’s really not very complicated. Most people just don’t think about their sexual orientation because they don’t have any reason to.

I want to make it very clear that while I have found a path that brings me profound joy and that is the right path for me, I don’t endorse this as the only path for somebody who is gay and religious. I will never, ever judge somebody else’s path as being “incorrect” and I know many people who have chosen different paths than myself.

1) If you know someone who is gay your job is to love. That’s all. Don’t correct them, don’t control them, just love and support them and respect them for whatever choice they make. 2) If you are gay and religious, look into the mirror and completely accept yourself for who you are.

That said, I do have some concerns about Josh’s thinking and, more specifically, how it is being received by the religious community.

1) I think a lot of people see this post and hear, “Hey, its possible! See?!? See?!?”  Yes, it is; but please don’t latch on to that idea without listening to the rest of what Josh says. It worked for Josh. I’ll accept that and respect him enough to believe that he is truly happy and doesn’t feel he’s “denying himself” by not acting on his sexual orientation. That does NOT mean (and Josh said this too) that it will work for everyone. Case in point – my own family. I come from a generation where gay men were taught to get married and their problems would go away. That is, in most cases, a terrible suggestion. There are different levels of sexual orientation, different intensities of attraction, and what works for some people would never work for someone else. As much as the religious world would like to understand homosexuality and other sexual orientations in a black-and-white, “this-is-wrong and this-is-right” kind of way, it simply doesn’t work that way. Sexual identity is complex. Each person is different. Josh is no more the authority on gay people than I am the authority on straight people. I’m just one dude. My attraction, relationships, and sexual life are completely different than that of other straight people. Don’t get me wrong, I think it is critical and incredibly important to to learn about homosexuality from someone who is actually gay; however, it is essential to talk to a variety of different people and not come to conclusions after the first person you talk to or hear. There are a vast amount of gay people who have tried what Josh is talking about and have had it fail miserably. He knows that, I just hope you do as well.

2) There is absolutely nothing wrong with being homosexual and acting on it.  Nothing.  No sin whatsoever.  It is natural, it is normal, it is scientifically understood (to a very large degree), and it is fine.  So, I cringe a little when I hear his reasoning for wanting to be in a heterosexual relationship.  I don’t necessarily think he’s denying himself (that’s for him to decide and say, and I’ll believe him and respect his answer), but his decision was based (in large part) on the idea that it is wrong to act on being gay. As a gay person, he said, you give something up no matter which path you choose:

If you are Mormon and you choose to live your religion, you are sacrificing the ability to have a romantic relationship with a same-sex partner. If you choose a same-sex partner, you are sacrificing the ability to have a biological family with the one you love. And so on. No matter what path you choose, if you are gay you are giving up something basic, and sometimes various things that are very basic. I chose not to “live the gay lifestyle,” as it were, because I found that what I would have to give up to do so wasn’t worth the sacrifice for me.

While I want to be sensitive to Josh on this statement and would never stretch to say “I understand” completely (or even partially) about the terribly difficult choices a gay person has to make I also have to be true to my own reaction. I value and respect his decision but don’t accept the idea that he gained more by choosing heterosexuality than he would have by choosing to live in homosexuality. That is, mostly, because I don’t believe there is a god saying it is wrong to be gay, that the society that condemns homosexuality deserves his friendship, or that adoption isn’t a viable alternative to natural-born children (If the woman I love can’t have children it would be very difficult, to be sure, but we’d still find a great future with adopted children). The large champion he has in his corner (on the side of heterosexuality) is god, a god who either doesn’t exist or is a hateful and spiteful being I wouldn’t like believing in anyways. You have to sanitize a lot of scripture to live a gay lifestyle and still believe in the Bible . . . I tried to understand my dad in the context of Christianity for a long time (somehow all “you are an abomination” stuff doesn’t leave much room for acceptance and respect). That doesn’t mean it is impossible to believe in god and be gay at the same time – obviously that isn’t true. It does mean that someone has to look at the scriptures with a liberal dose of selective reading. All those “god loves us” scriptures are great!

3) Unless, of course, you accept the idea that god hates the sin but not the sinner. The message of the LDS church, of groups like Mormons Building Bridges (as I understand it), and the message Josh bought in to (although he thankfully doesn’t prescribe it for everyone), is that it is not OK to act on your homosexuality. It is not a sin to be tempted, that is something you are born with, but it is a sin to act on that temptation. Josh may not be prescribing straight marriage to every gay man out there, but he did prescribe it to himself.

So to hear and see this new approach of love and quasi-acceptance is fantastic and I applaud the LDS for their development as a church and a community. Many people online aren’t satisfied with the church’s (and people like Josh and other Mormon groups) modern prescription for homosexuality because they’re not complete or quite accepting enough. I agree that there is still room to improve; but these groups and people like Josh Weed play an extremely crucial role in the lives of struggling gay Mormons, giving them a forum to be heard, respected, understood, and to meet people who struggle with the same issues (what I’m calling an “issue” here isn’t homosexuality, it is the social response to their homosexuality). In a society of perfectionism, conservative politics, strict commandments, and constant talk about marriage and family, these people have been misunderstood and isolated for far too long. The atmosphere of support surrounding them has changed drastically over the last 30 years, and for that I’m happy. I do, however, hope and expect that these groups will be more of a stepping stone to greater self-acceptance than a final resting place for many.

So – those are my main three beefs. I don’t expect most of my extended family or Utah friends to agree with all of the three points I listed, and that’s fine. What I hope is that you’ll listen to what Josh is actually saying about what it was like for him, realize that the struggle is real, and be open to the concept that not everyone should do what Josh has done.

I want to end by reminding you that I am the son of a homosexual who tried the church’s prescription. He was married for 10 years, had 5 kids, and couldn’t live dishonestly with himself anymore and chose to leave. I love and respect my father, and while my family’s history is difficult and complex, I can say that I and other people in my family are deeply grateful to have our father in our lives. Having someone so close do something society condemned helped me look more deeply into the issues surrounding homosexuality and eventually conclude society is very far off the mark.

Sexual orientation is a serious issue. I have met with many people over the years who have been affected by it. I have met with a Mormon mother of 5 who’s husband of 15 years finally admitted he was transgender, changed his name, and moved out. I had a friend in High School who struggled with being “bipolar” . . . constantly on the brink of suicide, and actually he was just gay and unable to admit it to himself and his family. Josh and these other Mormons represent an important movement towards acceptance, respect, and inclusion of faithful gay members of their communities, and I hope those of you who don’t fully accept homosexual people will take a deeper look at this issue and prepare for an intense change in perspective.

*If you agree with something I said here, or think the perspective needs to be seen elsewhere, please click the “follow” button and link this wherever you think it appropriate! 🙂 And please – share your thoughts below.

*** And, here some other posts I’ve found that I think are fantastic and should be read by more people!

View all posts by Jefferson

What do you think? Cancel reply